What is Sudden Cardiac Arrest? 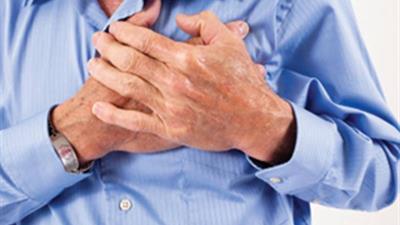 The Cause of Sudden Cardiac Arrest

Sudden Cardiac Arrest is often misunderstood as a heart attack. A heart attack is a plumbing problem where the heart is blocked, causing heart muscle to die. 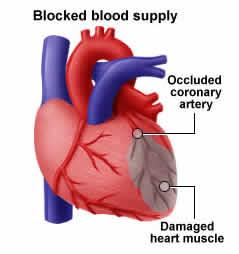 Sudden Cardiac Arrest occurs when the heart's electrical system malfunctions; causing rhythms that is rapid (ventricular tachycardia) or chaotic (ventricular fibrillation) or both. This irregular heart rhythm (arrhythmia) causes the heart to suddenly stop beating in any coordinated manner. The heart muscle quivers or fibrillates rather than pump blood.

Vital organs are immediately deprived of oxygen, causing the victim to collapse. Brain death and irreversible damage begin in four to six minutes after someone experiences cardiac arrest.

While heart attack victims typically experience symptoms prior to an emergency, around 50% of sudden cardiac deaths occur without prior signs or symptoms. Commonly the signs of a Sudden Cardiac Arrest are only apparent at the moment of a full on emergency. Those signs include:

Unfortunately even with a 10-12 minute ambulance response time, the best chance for survival lies in a bystander’s recognition of the signs, the availability of an AED nearby. Acting quickly the use of an AED by responders at the scene could terminate the chaotic ventricular rhythms and allow the heart to restore itself to a normal pulse.

Sudden Cardiac Arrest (SCA) is the leading cause of death in Australia, yet, it fails to receive the publicity given to other causes. It’s often confused as a heart attack, but in reality is a separate crisis in itself. Heart attack s a plumbing problem usually caused by a blocked artery however cardiac arrest is an electrical problem where the heart is not pumping oxygenated blood to vital organs. Deaths from sudden cardiac arrest each year with even many seemingly healthy teenagers and children. 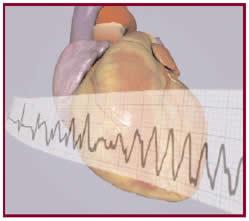 Although SCA can happen to people of all ages, with or without heart problems, occurrences are most common in adults with coronary artery disease. This will cause the crisis to magnify as our population ages. Due to Australia having a vast coastline, drowning is also common a major contributor to our accidental death toll.

Despite the availability of a clear and effective solution, approximately 95 percent of sudden cardiac arrest victims die before reaching the hospital. It remains a world-wide killer due to its lack of definitive warning signs, the speed of arrest and the current difficulty achieving an effective response time. The only factor we can manipulate in order to save lives is the emergency responders' access to an AED.

The necessary treatment is a rapid application of electrical shock. This must be within minutes. Victims have little hope for survival unless bystanders or paramedics restore a normal heart rhythm within 4-5 minutes. The chances of success are reduced 10 percent for every minute defibrillation is delayed. 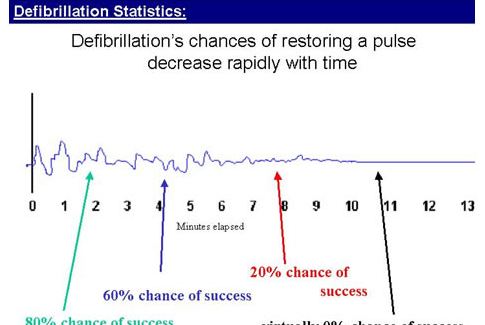 Because more than 80% of Sudden Cardiac Arrests happen in homes or public places, outside of a hospital setting, victims are caught out of reach of a rapid defibrillation that is unless you have an AED.

The Chain of Survival

he Chain of Survival is only as strong as its’ weakest link and unfortunately, Early Defibrillation is not the strongest link.

While CPR can extend the window of opportunity for responders to arrive and defibrillate the heart, the true solution is in deployment of AEDs and empowering bystanders to be the hero. Reducing the time to defibrillation through widespread access of AEDs is the only way to reduce our dismal survival rate.

Widespread access to an AED must be achieved to solve the Sudden Cardiac Arrest crisis.